This repository contains the Toit language implementation. It consists of the compiler, virtual machine, and standard libraries that together enable Toit programs to run on an ESP32.

Jaguar: Live reloading for the ESP32

It is also straightforward to install extra drivers and services that can extend the core functionality of your device. Add automatic NTP-based time synchronization without having to write a single line of code:

You can watch a short video that shows how you can experience Jaguar on your ESP32 in less two minutes: 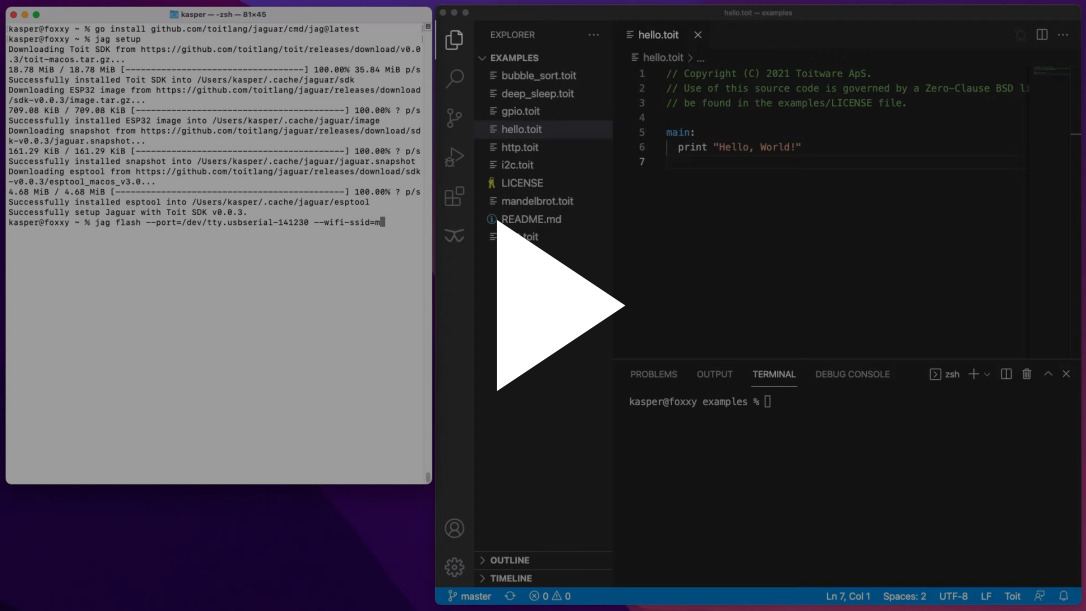 Use this invite to join our Discord server, and follow the development and get help. We're eager to hear of your experience building with Toit.

We also use GitHub Discussions to discuss and learn and we follow a code of conduct in all our community interactions.

The Toit language is the foundation for the Toit platform that brings robust serviceability to your ESP32-based devices. You can read more about the language and the standard libraries in the platform documentation:

We welcome and value your open source contributions to the language implementation and the broader ecosystem. Building or porting drivers to the Toit language is a great place to start. Read about how to get started building I2C-based drivers and get ready to publish your new driver to the package registry.

If you're interested in pitching in, we could use your help with these drivers and more!

For Arch Linux (or variants such as Manjaro) use your favorite AUR helper to install the toit or toit-git package.

We're actively working on simple installation steps for other platforms. For now, please use the build instructions below or download the .tar.gz files from the release page.

To build Toit and its dependencies the build host requires:

If you are using a Linux distribution with apt capabilities, you can issue the following command to install these:

You can then build Toit by running the following commands in a checkout of this repository:

For builds targeting ESP32 hardware additional requirements might be in effect depending on the build host's architecture, see paragraph ESP32 tools.

For builds targeting RISC-V, ARM32, or ARM64 hardware, see the Other platforms README.

If you are using Windows you can use Chocolatey to install the required dependencies.

After installing Chocolatey, you can install the required dependencies by running the following command in an elevated shell (usually the same you just used to install Chocolatey):

After that you can use the bash that comes with Git ('git-bash') and compile Toit in a checkout of this repository by running the following commands:

The Toit VM has a requirement for the Espressif IoT Development Framework, both for Linux and ESP32 builds (for Linux it's for the Mbed TLS implementation).

We recommend you use Toitware's ESP-IDF fork that comes with a few changes:

The fork's repository has been added as a submodule reference to this repository, so doing a recursive submodule init & update will establish everything nedded:

If the submodule update step fails with:

try following the steps outlined here. It is an issue in the upstream ESP-IDF repository caused by the tinydtls component having changed its remote URL.

To use the offical ESP-IDF, or any other variation, you need to add the Toit specific patches first.

Then make sure it is available in your file system and point IDF_PATH to its path instead before building.

If you want to build an image for the ESP32, install the ESP32 tools.

For other platforms, see Espressif's documentation.

Remember to update your environment variables:

Make sure the required build tools are installed as described in dependency sections ESP-IDF and Build system above.

Then run the following commands at the root of your checkout.

These instructions have been tested on Linux and macOS.

Windows support is still preliminary, and the build instructions may differ for Windows. Let us know on the discussions forum how we can improve this README.

This builds the Toit VM, the compiler, the language server and the package manager.

You should then be able to execute a toit file:

The package manager is found at build/host/sdk/bin/toit.pkg:

Toit has a VS Code extension. You can either use the published extension or build it yourself from the sources.

This makes the extension use the language server that was compiled in the build step.

The Toit language server is independent of VSCode and can be used with other IDEs. It can be started with:

See the instructions of your IDE on how to integrate the language server.

There are syntax highlighters for VIM and CodeMirror in the ide-tools repository.

Make sure the environment variables for the ESP32 tools are set, as described in the dependencies section. Typically this consists of running the following command:

Build firmware that can be flashed onto your ESP32 device. The firmware is generated in build/esp32/firmware.envelope:

If you want to flash the generated firmware on your device, you can use the firmware too. Internally, the firmware tool calls out to esptool.py so you need to build that first using make esptool. Assuming your device is connected through /dev/ttyUSB0 you can achieve all of this through:

By default, the image boots up but does not run any application code. You can use your own entry point by installing it into the firmware envelope before extracting the firmware.bin file:

Alternatively, you can also specify the entry point through the ESP32_ENTRY make variable and let the Makefile handle the flashing:

You can add more containers before you extract firmware.bin, so you firmware envelope can have any number of containers.

You can list the containers in a given firmware envelope:

The listing produces JSON output that can be processed by other tools:

Containers have associated assets that they can access at runtime. Add the following code to a file named assets.toit:

If you run this on an ESP32, you'll get an empty map printed becase you haven't associated any assets with the container that holds the code.

To associate assets with the container, we first construct an encoded assets file and add this README.md file to it.

Now we can add the encoded.assets to the assets container at install time:

If you update the source code in assets.toit slightly, the printed information will be more digestible:

You'll need to reinstall the container after this by recompiling the assets.toit file to assets.snapshot and re-running:

To access the device /dev/ttyUSB0 on Linux you probably need to be a member of some group, normally either uucp or dialout. To see which groups you are a member of and which group owns the device, plug in an ESP32 to the USB port and try:

If you lack a group membership, you can add it with

Configuring WiFi for the ESP32

You can easily configure the ESP32's builtin WiFi passing it as configuration when you extract the firmware.bin file:

The Makefile also has the ESP32_WIFI_SSID and ESP32_WIFI_PASSWORD make variables to support this, if you prefer flashing through make:

This allows the WiFi to automatically start up when a network interface is opened.