YLearn, a pun of "learn why", is a python package for causal inference which supports various aspects of causal inference ranging from causal effect identification, estimation, and causal graph discovery, etc.

The simplest way of installing YLearn is using pip:

Note that Graphviz is required to plot causal graph in notebook, so install it before running YLearn. See https://graphviz.org/download/ for more details about Graphviz installation.

YLearn can also be installed with conda. Install it from the channel conda-forge:

This will install YLearn and all requirements including Graphviz.

We also publish an image in Docker Hub which can be downloaded directly and includes the components:

Then one can visit http://<ip-addr>:8888 in the browser and type in the token to start.

Causal inference directly models the outcome of interventions and formalizes the counterfactual reasoning. With the aid of machine learning, causal inference can draw causal conclusions from observational data in various manners nowadays, rather than relying on conducting craftly designed experiments.

A typical complete causal inference procedure is composed of three parts. First, it learns causal relationships using the technique called causal discovery. These relationships are then expressed either in the form of Structural Causal Models or Directed Acyclic Graphs (DAG). Second, it expresses the causal estimands, which are clarified by the interested causal questions such as the average treatment effects, in terms of the observed data. This process is known as identification. Finally, once the causal estimand is identified, causal inference proceeds to focus on estimating the causal estimand from observational data. Then policy evaluation problems and counterfactual questions can also be answered.

YLearn, equipped with many techniques developed in recent literatures, is implemented to support the whole causal inference pipeline from causal discovery to causal estimand estimation with the help of machine learning. This is more promising especially when there are abundant observational data.

There are 5 main concepts in YLearn corresponding to the causal inference pipeline.

These components are connected to give a full pipeline of causal inference, which are also encapsulated into a single API Why. 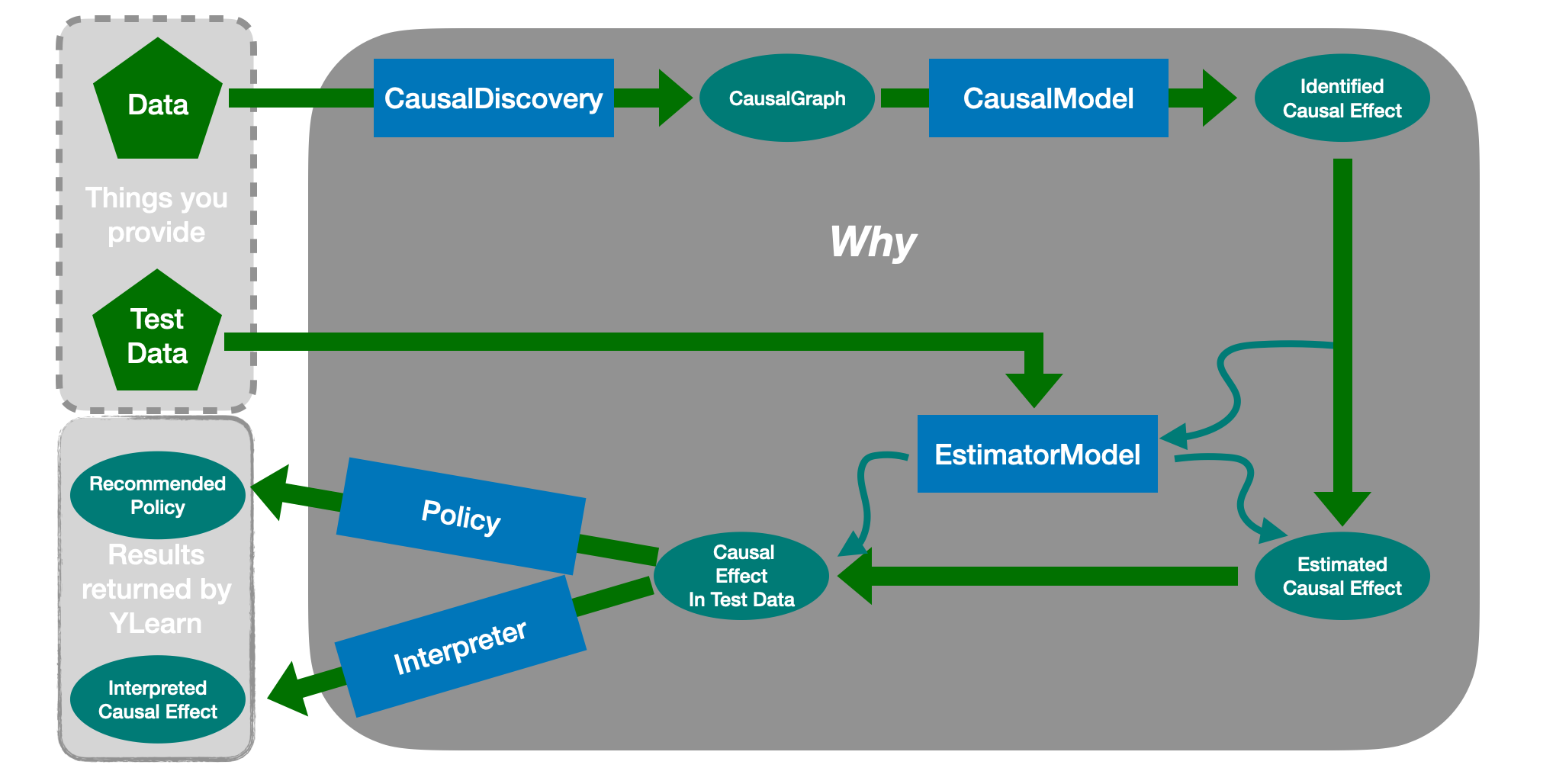 The pipeline of causal inference in YLearn.

Starting from the training data: 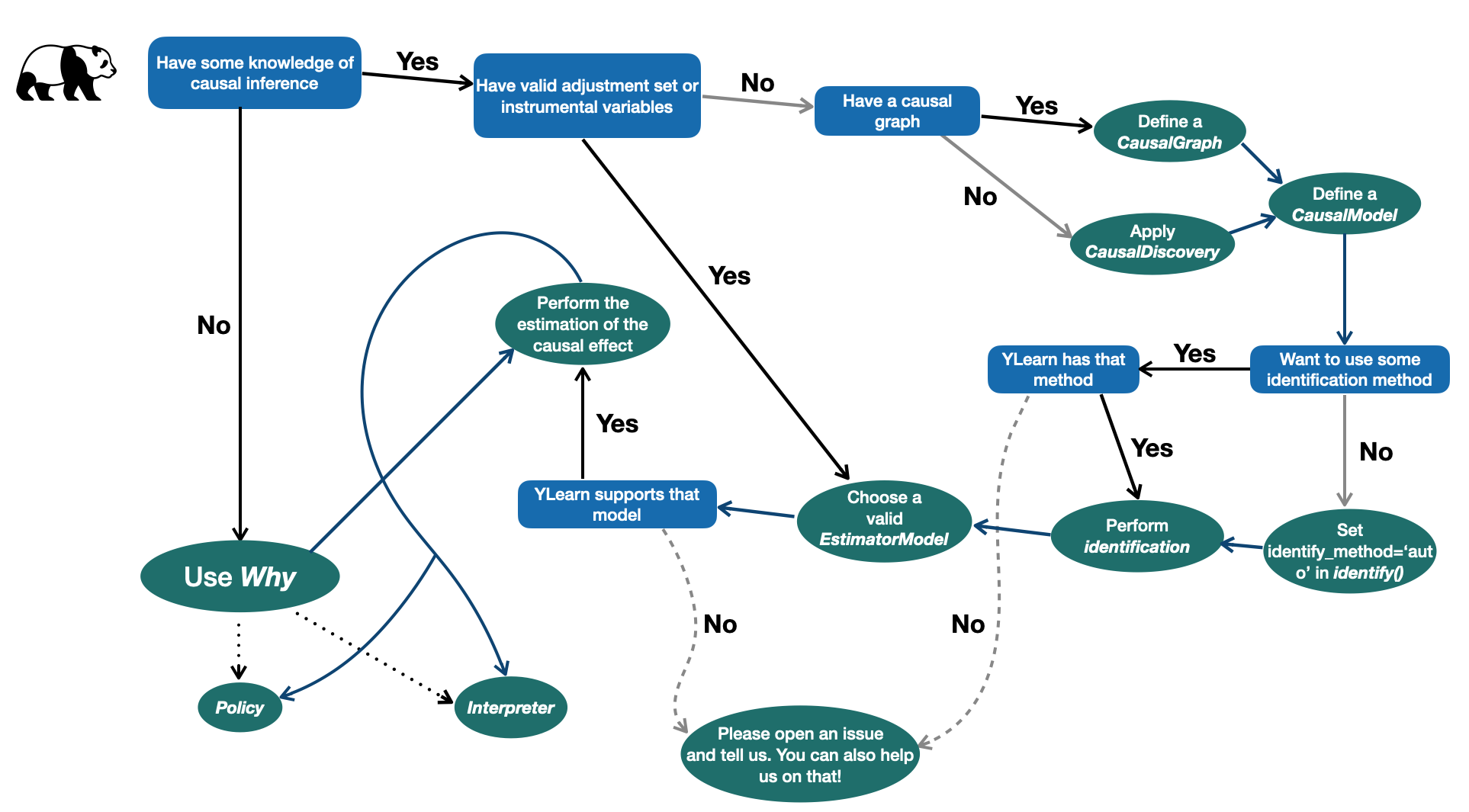 In this part, we first show several simple example usages of YLearn. These examples cover the most common functionalities. Then we present a case stuy with Why to unveil the hidden causal relations in data.

We present several necessary example usages of YLearn in this section, which covers defining a causal graph, identifying the causal effect, and training an estimator model, etc. Please see their specific documentations for more details.

Given a set of variables, the representation of its causal graph in YLearn requires a python dict to denote the causal relations of variables, in which the keys of the dict are children of all elements in the corresponding values which usually should be a list of names of variables. For an instance, in the simplest case, for a given causal graph X <- W -> Y, we first define a python dict for the causal relations, which will then be passed to CausalGraph as a parameter:

To represent such causal graph, we should

(1) define a python dict to represent the observed parts, and

The estimation of causal effects in YLearn is also fairly easy. It follows the common approach of deploying a machine learning model since YLearn focuses on the intersection of machine learning and causal inference in this part. Given a dataset, one can apply any EstimatorModel in YLearn with a procedure composed of 3 distinct steps: